Do people find user reviews helpful? Ever? Personally, I’ll never take a stranger on the internet’s review of a book/movie/anything as a real opinion, knowing there is no filter or real consequences for the author of an unfairly critical review.

Recently, I’ve heard authors of the alt-lit community cringe at the ultra-power of GoodReads. Most refuse to read the reviews, knowing they’ll do more harm than good. Yet the number of stars on GoodReads, unfortunately, sways many in whether or not to pick up a book, and maybe even influences publishing houses’ opinions on a prospective author.

Really? Lately, I’ve been reading the one star reviews on GoodReads just for giggles. I love reading the terrible, terrible reviews of great books, seeing the missed points, the flawed logic at hand.

I’ve collected some of my very favorite one-star reviews of some amazing works of literature written by people who picked up a great piece of art and then just effed it up from there. Enjoy, and remember – don’t take one stars too seriously.

“This was recommended by my good friend Carl, who I love very much. We both sat up until the wee hours of the morning discussing this book over a stiff bottle middlton whisky. When I turned the last page a tear came to my eye… not because of the shite book, but because I stubbed my little toe on a chair… Carl is no longer my friend”

“A bunch of weird people connected in weird relationship doin weird things… didnt get the philosophy behind this book… One star for the amnesiac plaque and the blood of Jose running around to find his mom…. made me think abt Tom and Jerry!”

“One hundred years of reading the opening paragraph over and over…”

“I’m giving this one star for now, but I only read to page 4 so overall excellent ration.”

“I’ll make a confession here… I rented this book from the library and hated it SO MUCH and became SO ANGRY about how MUCH that I hated it, that I felt compelled to write “THIS IS SHIT” at the top of the first page. (In pencil of course.) So, I did my part to ensure that at least one sentence in one copy of this book makes sense. This book sucks more than the biggest black hole in the entire universe.”

“For a book with jest in the title, it sure wasn’t very funny. The only part close to amusing was the bit where that urban myth about the burglar sticking the toothbrushes up his butt actually happens to one of the characters. I might have laughed, if I hadn’t already heard the same story passed off as fact by several credulous individuals… It sure weren’t no Gravity’s Rainbow. DFW should stick to Brief Interviews with Hideous Men – some of which were pretty decent.”

“I am a blue eyed blonde myself but I never knew a black kid who wanted blue eyes. They were all smart enough to know blue eyes would look ludicrous with their skin.”

“This is just more racist crap to read on the Oprah a.k.a. The Antichrist man bashing crusade!”

“this book sucks. oprah can shove it.”

“I did not under stand this book. I was very upset and appaled! Why would pigs be in charge of a hole farm?!?”

“I hate books where animals act like people. I know it’s all symbolism, but I don’t even care for Charlotte’s Web talking animals so how in the world would I like this books. That and I read it in 7th grade – maybe I should give it another try as an adult someday (don’t think I will)”

“I did not care for the book. In my opinion it was good but bad. If I went book shopping I would not get this book, however this book was action packed, and full of tricks and deception. There was lots of separate events such as the towers collapsing etc. and the book also has an evil side, such as sending an animal to a butcher for money to buy alcohol. Overall though the book is hiding a actual event that happened in the real world. And shows how bad Stalin actually was.”

“This is the story of rodion romanovitch raskolnikov, an irritable asshole who does some murders because he thinks that extraordinary people should kill ordinary people if they get in their way, instead of just complaining about them. But instead of going on his extraordinary way, he goes crazy with guilt and in the end… uh, I guess I shouldn’t say what happens… I did like it that a lot of the characters died. I guess I was into the drama.”

“I chose to read this book because I wanted to appear more intelligent than I actually am. It was during my first year of university and I lived in a house with people who drank brewed coffee and ate microbiotic foods whilst discussing communism and metaphysics… I found it to be a very very tedious read. It did teach me a few things about myself though.”

“Sadly, for high school students, this seems to be the favorite novel of English teachers, who I have found react with great hostility to any criticism of it. I remember one in particular who told me that “It’s either your favorite book, or you didn’t understand it.” It is easy to understand. Even though the phrase didn’t exist when the book was written, or when I read it, it is pure whiny political correctness. Obsolete dinosaur thinking abounds.”

“I couldn’t get on with it. Slow and doesn’t work as a whodunit because we now have DNA evidence. Cannot think why so many people love it.”

“Bees. Flowers. Death. These are Emily’s most favorite metaphors. If she ever let a man seduce her the way she let death seduce her, well she might have been a very satisfied woman and a far better writer… It is ever so clear that this woman died without ever knowing a man (sexually), or hardly ever set foot out of her house, for that matter.”

“I liked her poetry better 10 years ago.”

“I love that she made money and we have a woman writer as an icon, that’s great! What a wonderful rags-to-riches tale. Her life, no the silly books. Remember, I may not like the books, but I love harry potter jokes 🙂 for those countless joys, I thank her! Srsly though if any more brits complain about the holocaust… oh wait THEY call it wwII, no one put them in concentration camps. Just like j Tolkein and his rings kvetching. Sigh”

“First of all, eff these books. Harry Potter had BARELY any romance, and JESUS CHRIST, it is as boring as HELL! Why the hell did they make so much money!!? EFF, EFF, EFFFF! (sorry all HP lovers…pls don’t hate me?)”

“When I picked up this book in the children’s section (yes, the CHILDREN’S SECTION) of the library after hearing all the hype, I picked it up with a hopeful mind. Little did I know that I would find it only full of the worst kind of witchcraft. I wouldn’t be surprised if J.K. Rowling publicly announced her conversion to Satanism – honestly, it’s no secret that she is one, or at least confirms to the beliefs. Only one who follows the Devil would EVER write about FLYING broomsticks and motorcycles, unicorns, and magical toads. Toads are NOT magical, they are mere beasts created by our Lord to serve us.”

“Awful. I hated this so much. I hated the way the author tried to make me like Jane Eyre by victimizing her in the beginning and throughout the story. Just because somebody is being treated badly doesn’t mean I like them!”

“Poor Jane is nice, but not the sharpest crayon in the box. It’s nor her fault though – the author made her that way. SPOILER ALERT!!!! Melodrama Jane marries a boring, condescending dumb head because his eyes fall out. I could write the sequel (Say it like Mr. “T”): “Don’t Marry a Man Just ‘Cause His Eyes Fall Out, Foo!” or (in Jane’s voice): “I Wish I Had Just Baked Him Cookies.” Somehow I doubt it would catch on, but my book would be better.”

“I was stalking this dude on facebook (yeaah don’t judge) and found out he liked the author, and especially this book so I said why the hell not. This is just something you can’t unread. I can’t explain how I feel right now… I never had an opinion on drugs and people who do them but now I’ll just think about this book. And shudder maybe.”

“The incoherent, perverted ramblings of a depraved homosexual junkie murderer who of course is deified by the far left.”

“Suked. Who wants to read ramblings while someone is fucked up on heroin? I think I have taken enough drugs in my life to realize that you don’t need very much skill in order to be as creatively disgusting when you are sitting around with a needle stuck in your arm and your red eyesrolling in the back of your head, and your drueling all over your typewriter.

Kati Heng
Kati Heng is a writer living in Chicago. She’s written for Thought Catalogue, Literally Darling, The Fanzine, Weird Sister, The Newer York and more. Kati has been surviving off of pizza, glitter and glam rock since 1991. Follow her on Twitter or Instagram @katiheng
Latest posts by Kati Heng (see all) 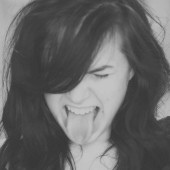 Kati Heng is a writer living in Chicago. She’s written for Thought Catalogue, Literally Darling, The Fanzine, Weird Sister, The Newer York and more. Kati has been surviving off of pizza, glitter and glam rock since 1991. Follow her on Twitter or Instagram @katiheng

From the Desk of … Kimberly Ann Southwick

From the Desk of … Christine Rice