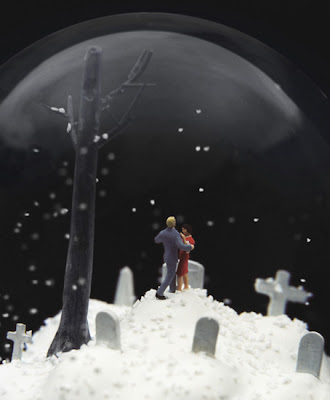 Shoutout to all my old Northeastern compadres who snuggled up for the big white dumpage. Either for naught or for wrought, as no one says. Monday in Portland, it was a pleasant 50 degrees. The weather literally felt like a cheerful 50 year old person who decided they were really going to get into gardening this year. Tuesday, it was drizzly, but not terrible, like that same person was remembering someone they knew a long time ago who was really into gardening but is now gone.

In other news, If You Need a Black Globe would be a great name for a metal band. Nearness isn’t knowledge, but it certainly warms you up to the idea. I had a dream that someone carved my face out of an apple, and I don’t recommend seeing your property management person in the shampoo aisle at Whole Foods. But I do recommend telling your French punk friend about how you fixed a VCR when you were eight.

If you don’t have any shampoo to eat or VCRs to tweak, you might spend the next snowstorm/nostorm time inside reading some great new editions of online magazines! In case you haven’t noticed how this roundup works, it’s kind of a game. Where I quote random bits and pieces from things I’ve read and string them together in a prismatic/jerky way. So why not formalize the game like this:

The first person to identify the origins of at least 5 of the lines/images/chunks below will win a free book of their choice from Small Press Distribution, courtesy of Real Pants: Mike’s Bank Account division.

No cheating, no Googling, you’re on your honor, read the freakin’ journals. What, you can’t read words on a computer screen? No, that is a real concern, I feel you. Is it weird that you can win a paper book by reading words online? Yes, but the world is weird. How do I find these journals anyway? Mostly by seeing posts on Facebook, honestly. If you want me to feature your journal, just send me an email or a message somewhere! I especially love new cool journals that are doing their thing in a really singular focused way (h/t to Powder Keg, for example). Why did this paragraph turn into a FAQ? Because I had a dream that someone carved my face out of an apple. HAVEN’T YOU BEEN PLANKING ATTENTION.

Now for the magazines! Read carefully!

Timber’s stocked for Winter 2015 with unsure lovers and layup-rejecting tides. Now’s the time to switch to the last words of buffalos, copy Chinese text onto sticks, and spray WRONG CLOAK across the door. Are you in a room they built the house for or a house they built a room for? Do you abuse yourself with ponds? If you say “I,” will the two of us will be gutted? Tell Joe how you get pains in your stomach when you see the wrong colored bumper stickers. Read smarties like Jericho Brown talking about The New Testament, or Victor LaValle and Erin Armstrong talking about messes, brutality, and hip-hop. Innovate your winter experiment with Jeffrey DeShell and Stephan Graham Jones and read Timber Journal.

One of my favorite online magazines, The Destroyer, is up to 4.1 now. They are the perfect journal for if you haven’t been drinking enough water this week because you don’t know what brave means. Instead, you’ve labeled every part of the diamond as “the future.” Your white daddy explodes like the dead animal in your mouth. You didn’t sleep last night because you were drafting instructions for a fire with perfect reception. By the time your computer tells you that you’ve played the same song 97 times, you realize the sexual darkness is no different than any other darkness.In between you’ll find all the costumes at the 1981 Odyssey Nightclub Halloween party. No one knows who plays the out of town cop. We undo as much as we make believe. Program the blotch to lob the ball. Formalize the barf, annotate the stunts, conflict the porcelain. Hey is that a blood stain on that tire iron. Sure is. Go on and slide down The Destroyer.

“Smoking is bad for you unless you’re a glue gun,” said one lame way to start the intro to SGG 12. What isn’t lame is the day we keep resurrecting. Inside are the styrofoam bliss and the glass mask and the tummies full of cereal. Outside, your father runs the hydroelectric dam. (Your mother? Become of the scrawl). The blacksmith’s son thinks the blacksmith’s daughter thinks he’s stupid. Woolly mammoths spring out fringed in gritty beads. Surfers get rigged in upward momentum. Stoned dolphins dangle at the Louisiana State Fair, and they may or may not tell you what they know. Like when there is a sound that only you can hear, it’s time for us to find a new place to sleep. Like don’t worry: someday you will sing perfectly.

Finally, what are those foggy folks down in the Bay Area up to? They’re up to issue 18, if you’re talking about Eleven Eleven. (Their 7th online-only issue!) I’m going to start by breaking from the game to urge you by name to check out their feature of three Burmese writers: Han Lynn, Khat Thi (both translated by Ko Ko Thet), and Thi Mar Win (translated by Kenneth Wong). Burma is a really fraught place that more people should know more about, and what better way to know than with its poems? The poems say “The birdwatcher’s been defeated this time. / He doesn’t know the names of the birds.” If they could start again, they’d start from year 0. They sing about all the kinds of miles: “The miles that I can see but keep me divided; / The miles that I can touch but cannot have.” Eleven Eleven plans to feature Burmese poems in each of their forthcoming online issues—definitely something to keep your miles and birds out for.

Following up that section is Eleven Eleven’s hugeness: six packed sections, some Joyce variations, some interviews and reviews. How do you swim through it all? Well start by taking yourself to a silent joke. Tell the children how trenches knuckle down from the ocean floor. What if you go beyond power? I’m not sure, but it’s no chit chat without blood. These sections are warning you that they’re all done with visiting the dreams of strangers. They’re eating Ibuprofen like they’re Skittles. They’re feeling lucky to have made it across. They call the self back to the self among the men with stone in their veins. Plain electrons aren’t so colorful. “Hey other waves” is what you’ll want to call. What gives, other waves? What gives?

Mike Young
Mike Young is the author of three books: Sprezzatura (2014, poems), Look! Look! Feathers (2010, stories), and We Are All Good If They Try Hard Enough (2010, poems). He publishes the free online/print literary magazine NOÖ Journal, runs Magic Helicopter Press, and lives online at http://mikeayoung.tumblr.com. In person, he lives in Santa Fe, NM.

Mike Young is the author of three books: Sprezzatura (2014, poems), Look! Look! Feathers (2010, stories), and We Are All Good If They Try Hard Enough (2010, poems). He publishes the free online/print literary magazine NOÖ Journal, runs Magic Helicopter Press, and lives online at http://mikeayoung.tumblr.com. In person, he lives in Santa Fe, NM.

“Haloed by this next sorrow, sorry.”

Lit Mag Roundup Scavenger Hunt: “77 cents will not do the bald eagle any good”