One Day As Lion: A Review of Justin Sanders’ for all the other ghosts

Gene Wilder, Prince, and David Bowie are dead. Institutional racism is not, as witnessed by the deaths of Alton Sterling, Philando Castile, and too many other victims of police violence this year. Meanwhile, the most uninspiring presidential election in recent memory looms in the background as a reminder that America has reached a crisis point within identity politics. Too many issues facing this nation are being reduced to a referendum on whose tribe is louder.

Consider the recent dialogue surrounding trigger warnings, which was rekindled by the University of Chicago’s curt open letter stating that the school doesn’t support them (or safe spaces, although it isn’t prohibiting teachers from using them). I found a lot of wisdom in how Roxane Gay interprets them, but I’m not sure what to make of this stuff, myself. Even as someone whose life has held a fair amount of trauma, the discussion surrounding trigger warnings is difficult for me to navigate. To my surprise, Justin Sanders’ new collection, for all the other ghosts, has directed my thoughts on the subject.

Justin is a friend of mine, an activist, and an educator who feels some degree of responsibility for his students’ comfort and mental health. As a teacher, Justin has never been silenced by the presence of trigger warnings. He employs them in his classes without shying away from troubling content, and even coordinates with his school’s counseling facilities whenever a particularly gruesome subject comes up, just in case his students need it. That’s smart, not to mention extraordinarily kind.

Similarly, the stories in for all the other ghosts, which he describes as “true fiction,” confront racism, poverty, misogyny, and oppression as they appear in Baltimore. His male and female characters are violent, and have violence visited upon them. They tag vacant buildings with spray paint. They trust people (often men) who hurt them until they learn not to trust at all. They are abused and either wither away from it or gain apocalyptic strength from it. They catch fireflies and inhabit familiar Baltimore streets and landmarks; Mosher Street, Pratt Street, Leakin Park, the Jones Falls Expressway. More than anything else, the characters in Justin’s work are observant, and written with sympathy and understanding where most writers (myself included) would settle for cynicism.

As just one example of this, the story “End” begins with a white woman screaming the N-word from her car at a black child, and later the point of view swoops into her head to give the reader a glimpse of what made her so angry. It’s a rhetorical touch worthy of Jello Biafra, and this book is full of them.

On a sentence level, Justin’s work is superb. He balances colloquial language with references to the Book of Judith and Greek mythology, his dialogue is crisp and natural, and his handling of surrealism is pitch perfect.

In “WND,” tagger Nefertia mourns a friend by ritualistically painting her face with white powder and burnt cork ash. “Then she’ll let her dreadlocks down and reach under her bed and pull out a rifle. She’ll stare at her reflection in the mirror of the makeup case and see a ghost staring back. She’ll see the colors and forms of it all. She’ll see that she is water, a tsunami pulling bodies out to sea and that it’s pointless to resist the wave.” Her own disappearance comes a page later: “And then like a cigarette lit and left on a windowsill, she’ll be taken by the wind.”

The stories here are tense, but structurally loose enough to surprise the reader, and the narration wields an impressive peripheral view; it’s clear that an entire world exists around the stories in this book.

In the book’s acknowledgments, Justin explains why he erased the bodies of Laura and L.D. Nelson from the lynching photograph that is the book’s cover; he wanted to refocus the image on the crowd of observers in the photo, watching the lynching from a bridge. I think about that a lot when I read about trigger warnings. It’s hard not to link them with the recent (and long overdue) trend of oppressed/traumatized populations giving their voices space and volume via the Internet, which has projected them across many forms of media (to quote a therapist friend of mine). Those voices disrupt the idea that the voices of white men (mine, for instance) are automatically objective and rational, and put a lot of things about our culture into a new and unflattering context. Yes, they can be abused by jerks with axes to grind, but I’m learning that they are not an instrument of censorship by default. Justin did not censor himself. He spoke his mind in for all the other ghosts, and thank God for that. He has a lot of worthwhile things to say.

Buy a copy of his book here, and hurry; supplies are limited.

Dave K
Dave K. is a contributor to Adfreak, BN Reads, and Splice Today, and his creative writing has appeared in Front Porch Journal, Writers & Words, Cobalt, Welter, Artichoke Haircut, Truck, and on an LED billboard in Baltimore's Station North Arts District. He is the author of stone a pig and MY NAME IS HATE. He is also a village in the administrative district of Gmina Konopnica, in central Poland. 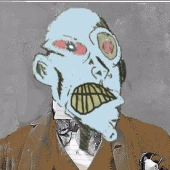 H.A.G.S. #3: All the Rage by sam sax and Nostalgia for Death by Xavier Villaurrutia