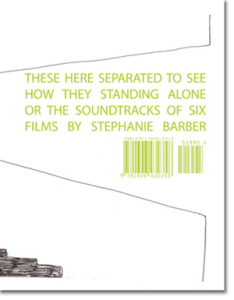 Here at Real Pants (and cross-posted at Facebook) I’ve been writing the history of some of the books I’ve put out with my small press, Publishing Genius. Today, having written about Cheryl Quimba’s poetry collection, Craig Griffin’s cookbook, and Chris Toll’s poetry collection, I’m halfway there and I’d like to write about PG’s first perfect bound book, which is also a DVD. It’s called “these here separated to see how they standing alone or the soundtracks of six films by stephanie barber,” which is a pretty great title. Right?
Until Stephanie Barber let me publish this collection, I had only put out two books—Dave NeSmith’s chapbook of drawings called “El Greed,” and “Whale Box,” by Lauren Bender, which was a long poem that she had read at the IE Series in Baltimore.
So it was a big deal to get to work on a bigger project like this. If the title doesn’t make it clear, “these here separated” is a collection of six of Stephanie Barber’s short movies, packaged together with a book of the narration/dialog from each one. That way you can pop in the DVD, open the book, watch and read along. Or just read.

Really, that seems like a strange thing to do. But with Stephanie’s film and video work, it’s actually very rewarding. One reason for that is because it allows you to concentrate on her unsettling narratives in a unique way. When we put the book out, I had seen her film “catalog” a few times already, but because of the layered complexity of her work, I’d missed a lot of the story and detail. It wasn’t until I read along that I had a good sense of everything that happens, and the full depth and imagination of the piece.
The effect isn’t like reading subtitles. That’s what makes the book successful, I think—and, in part, it’s the answer to the question implicit in the title: what happens when you separate a soundtrack from the film? The great and serious film publication, “Cineaste,” wrote about the book and asked the same question, resolving, “Not only does this mean watching single short films repeatedly. It also means reading along, and reading up.”
ANYWAY, that’s what the book is. Here’s how it came about: I solicited material from Stephanie and this is what she proposed. We started working on it at the end of 2006, which was around the time she transitioned from doing primarily film work on 16 mm and was exploring video formats. So we decided to combine equal parts new video with her films, “catalog,” “metronome,” and the ever-popular and hilarious, “dogs.”
(The new videos are “the inversion, transcription, evening track and attractor,” a meditation on photography and Susan Sontag (and more), “a visit and a play” in which two voices get ready to go to a play, then go, and we watch the play, which features two of the strangest puppets ever, and my favorite, “dwarfs the sea,” which tells story after story about men on a sailing vessel.)
After we selected the work, and Stephanie approved the digital transfers of the films, we were ready for production. By this time I had decided that it was better to hire the printing done than rely on my crafting skills to handmake books (because I have no crafting skills), so I found a printer called 48 Hour Books. Many small presses at that time were using them, or starting to, I think because we weren’t so good at Googling.
I ordered DVD reproductions from somewhere else, and then I rubber cemented the DVD envelope into the back of each book we received from 48 Hour Books.
The first edition of the book did not turn out well. I don’t think my cover art was print ready, so they were heavily pixelated. We were very bummed out, but I tried to put a good face on it.
I took the books to Atomic Books, a cool shop in Baltimore, and tried to sell the book on consignment but they turned me down. They said that $20 was too high a price. I think, given the cover art snafu, they were right.
But I learned that pricing this kind of work has its own complexity, because it’s can be easily reproduced. Like, you can sell a painting for a ton of money because there’s only one of them. But video work, even when it’s high art, can be reproduced, so theoretically it should be priced as such, or be listed as a limited edition.
And then it’s more complicated when you think about the world of experimental film, which is often taught in colleges, where one professor can buy a copy for cheap and then show it to 100 students in one go. So along with the $20 price, we also had to make an institutional price. Surprisingly, the institutional version didn’t suffer at all in spite of the price tag, which I think is testament to Stephanie Barber’s reputation as indispensable.
And so it didn’t take long for that first print run to sell out, and then Stephanie and I got to work on a reprint. This time she asked Peter Barrickman, a Milwaukee artist, to provide cover art. He came up with a drawing that stretches from the front to the back. On the front you can’t tell what it is, but when you look at the cover as a full spread, it’s clear that the image features a person alone in a movie theatre, reading a book.
It was Stephanie’s idea to put the barcode so front-and-center, immediately below the title. I resisted it at first but now I love it, and no one has ever commented on it. I think barcodes are mostly invisible.
“these here separated” has a long tail and continues to be a top seller. If we make a third edition, I think it will just come with a download code or a Vimeo password instead of a DVD. Who even has a DVD player anymore.
If you’re interested in checking out this amazing book, it’s on sale now for 50% off, and free shipping, with the coupon code “backagain.” Order it at the Publishing Genius website.

Adam Robinson
Adam Robinson lives in Atlanta and runs Publishing Genius Press. He is the author of two poetry collections, Adam Robison and Other Poems and Say Poem.

Adam Robinson lives in Atlanta and runs Publishing Genius Press. He is the author of two poetry collections, Adam Robison and Other Poems and Say Poem.

The puddle-wonderful story of Mud Luscious

What Can We Learn from Amazon?