The Days of ‘Respectfully Decline’ and How they Led Here: Submittable as a Tool

When I was in high school, the editors of our lit journal, Demogorgon, would copy submissions into submission “packets”. They would have cool collaged covers, and each piece would be anonymous. Literally, the submissions were photocopies of paper submissions that student writers put into a cardboard box in the library, so the font chosen sometimes lent itself to the conversation. We would talk about each piece at length (one time, it was a transcription of Radiohead lyrics?) and then after our conversation, we would vote. “Who would like to accept this piece for publication?” Hands would raise–or not–and we’d take count. “Who would like to respectfully decline?” Hands would raise–and we’d take count. (Radiohead was respectfully declined.) If the piece had been accepted, we’d then vote on whether it would appear in the more professional literary journal we would put together, Demogorgon, via Perfect Printing (now Perfect Communications, and where Gigantic Sequins is usually printed) OR the photocopied “other” zine-style journal, which looked much like the submission packets, but came with each piece illustrated by our members and was freely distributed, called Space Available.

I wonder how Demogorgon does things now–certainly, I hope the term “Respectfully Decline” has carried forward. It leant such a nice touch. But I’m sure that in the years after I left Demo graduated from the cardboard box in the library to accepting submissions online.

Gigantic Sequins, at first, accepted submissions via email. I did things fairly similarly to Demo for awhile, sans cardboard box in a library, holding meetings and discussing each piece individually. But as submissions grew, our staff grew out of New York, our genre editors were spending too much time building packets, sending them out, and consolidating reader votes. We met the Submittable folks at an AWP conference in DC, back when they were Submishmash– and we were converted.

I decided for this post to put together some Submittable tips. Since we’ve been in the Submittable game for 5 years, GS has grown up with them. Ideally, these tips will give editors ideas to implement into their own processes and writers an inside scoop on how things might look from the editorial side.

Submittable has always been super attentive to making their service the best of its kind. If you email them, they email you back, quickly. If you go to their table at AWP with a comment or question or complaint, they’ll field it in a serious manner. They take what they do–and therefore what we do–seriously. They’re constantly updating and improving the system–and in increments so that you’re never too overwhelmed with the amount of changes. They send emails when they make these changes, letting you know what you can now do that you couldn’t before or how you can do something better. For instance, in their January newsletter, I found out that you can “randomize” assignments to your readers. Can’t wait for the monthly newsletter? The Release Notes section of their blog lists “in real time” all of their updates.

One of my favorite Submittable features is their new ideas think tank, where users can put forth ideas, and other users can vote/comment on these ideas via Submittable Feedback. So many of the updates that have been integrated into the system have come from users telling the company what they want–and other users saying, yeah yeah yeah that! Depending on your account, you get a certain number of votes on these feedback items, which really makes you think “what here would be the best?” If what you see isn’t there, you can propose an amendment to the Submittable constitution–and then encourage people whom your idea might benefit to vote it up! I spoke recently with a Submittable employee on the phone, and they said that even though they haven’t been utilizing the think tank as much lately as they were in the past, they’re planning to start using it more again soon.

GS uses the site’s labels system probably more than anything else it offers. We have labels for everything and an intricate document that we share with each new editor to familiarize them with the labeling system. While I understand those with free or limited accounts might not have access to as many labels as we do, I still wanted to share with you some successful labels.

When a piece is withdrawn, we no longer need our readers to read it, so a WITHDRAWN label goes on those pieces. We have labels for whether a piece is a YES, NO, or MAYBE for the upcoming issue–again, this helps the readers know what to read and what not to read. We try to encourage our readers to read and vote on the submissions marked MAYBE because they’re the ones we’re not sure about. We also tell them to “ignore all other labels” except the ones I’ve mentioned, which I’m sure is impossible, but it’s the best we can do short of coming up with a code for the remaining labels, or asking Submittable to make certain labels visible to only a certain level of staff (HEY THAT’S A GOOD IDEA; I’m putting it up on the think tank! Okay, it’s already there… Let’s vote it up!) So we also have labels for… when someone deserves a personal reply, when we’d like to ask someone to resubmit in the future, when something has been submitted in the wrong category, when a submitter should be emailed because we have a specific question/request of them, when someone has committed the sin of submitting work in multiple submissions for the same genre rather than all in one. We also have labels reserved for use by each level of editor, labels just for art, labels that are used only for contest submissions, and labels that refer to submitter subscription orders. Phew!

Speaking of levels for staff access, that’s a really helpful thing, too. Admins can give people access to just read and vote on submissions without them seeing the names of the people who are submitting–and I can give myself “blind” access to certain submissions via the category builders. For instance, we read blind during our contests, so I blind those categories to everyone until we’ve chosen the finalists to send to our judges. So the levels in and of themselves come with certain permissions, but then there are certain things that you can manipulate based on what level everyone is on, like the category blindness.

We’re still, at GS, trying to figure out when we should move all submissions over into the ARCHIVED file out of the ACTIVE list. We used to wait until all final decisions had been made to move everything, though recently we switched over to moving things over into archived during the open period, to clear up the clutter that the active list becomes with accumulating submissions. However, we recently discovered moving things in and out of the archive affects the REPORTS that Submittable offers, which is what we use (instead of counting ourselves) to determine how many readers voted on enough submissions to make our masthead.

The reports and also the search filters offered are two features that help to make Submittable really awesome. I can easily see how many submissions are “assigned” to certain readers and editors as well as the number of overall submissions and how many were in which genre for a certain submissions period. This is useful information when it comes to my own workload as well as the workload for my editors and readers. We’ve moving, because of viewing results like this, from a system where we admit to the masthead those readers who have read a certain percentage of our incoming submissions each period to one that admits them based on the actual number read. We realized that it’s unfair to ask readers to read “75%” of the submissions if that number is constantly changing–and especially if it’s constantly rising!

As for the search filters, depending on the access level your editors have, they may be able to see more than their assignments within the submissions list, and the search filters are key. My poetry editor can filter the submissions so she just sees poetry then–but she can also filter them in any variety of ways–by labels, by status (NEW, IN-PROGRESS, ACCEPTED, etc.), by who it’s been assigned to, and more. The list itself can also change order, which I love. You can order by author name, submission name, number of positive or negative votes, status, title of submission, submitter name, and more. This makes archiving all declined or withdrawn work easy–you can either filter the list, or if you don’t want to have to re-filter it back to your original settings, organize it by status and do so that way. It also makes it easy to mix up what you read–“today, I’ll read everything that I haven’t that was submitted to us early in the submission period,” is one I like to do myself.

THERE’S SO MUCH MORE

GS <3s Submittable! There are so many different ways to use it right and well. Please comment below with your own pro-tips for Submittable users–or, if you don’t, what your journal’s accept/respectful decline process looks like. Do you use a different platform? Are you still accepting submissions via email? By only post mail? Let us know!

FOR MORE resources that can help in running a lit journal, see this subsequent post TOOL KIT: Best Resources for Running a Lit Journal.

3 different years’ worth of my high school’s lit mag, Demogorgon! 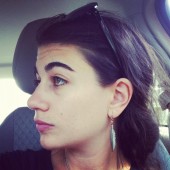 Kimberly Ann Southwick is the founder and Editor in Chief of the biannual literary arts journal Gigantic Sequins. Tweet her @kimannjosouth or visit her website kimberlyannsouthwick.com for more.

The Academy and the Literary Journal: Great Expectations and Hard Times

Paper and Ink: A Conversation with Katie Raissian of Stonecutter

A Day in the Life of a Literary Arts Journal Editor